Listen to Karen Tell the story 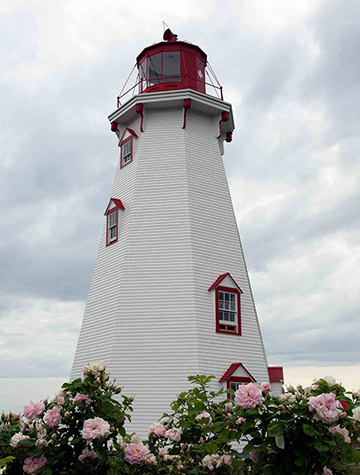 Another one of PEI’s charming lighthouse (there are 63 on the island, some active and some private). And like all the lighthouses that attract visitors this one is also unique in that it is the oldest wooden lighthouse and the first octagonal lighthouse built on PEI. Built in 1853 it stands guard over Cardigan Bay, guiding with its still active light.

This is one of the luckier lighthouses as some on the island have fallen into disrepair and seemingly abandoned. Ownership for the lighthouse was taken over in December 2015 by the volunteer Panmure Island Lighthouse Association. Since then it has been lovingly restored with a fresh coat of paint, fences, parking lot and the main floor, that used to house the lighthouse's generator, ripped apart to remove asbestos and reveal the wooden timbers behind the walls. 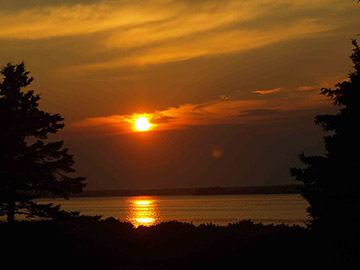 Our tour guide was the daughter of the last lighthouse keeper and she pointed out to us the hollow pillar between the second and fourth floors which housed the pulley and weight system which traveled up and down the shift causing the light in the lantern to revolve. Leona explained that as a girl she earned her allowance by winding the pulley back the next morning so it was ready for the night.

Certainly, well worth the visit and lots of information provided as well as books and other items for sale in the gift shop. One of the fund raising ideas to keep the lighthouse well maintained and giving visitors a chance to live the romance and history of lighthouses.

The lighthouse is close and visible to our campsite at Panmure Island provincial park, camping for RV’s (2-way sites) and tents. A beautiful campsite, clean, large sites and great view of Cardigan Bay and the lighthouse. Also, fantastic sunsets. At night, I could lie in bed and out of the RV window see the beacon of Panmure Island Lighthouse as it swept over the bay. Talk about romantic PEI.

On your way to the lighthouse is the Sandbar & Grill Restaurant. We decided to treat ourselves and glad we did. The ambiance was beach casual, the menu interesting and the food great. Also, some craft beers…..

Click on to the images to view photos of Panmure Island Lighthouse, PEI