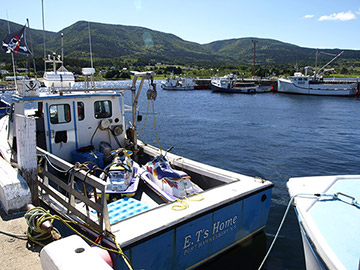 August 11, 2013 Headed from home in pouring rain, with the hood of the truck headed toward Hideaway Campground, just outside of Dingwall, Two K off the Cabot Trail. Enjoyed some great views that the Cabot Trail is known for on the way up. Missed the wonderful views going up Cape Smokey due to fog.

Hideaway Campground has excellent signage and is somewhat a gem, hidden back in the woods overlooking Aspy Bay. There is an easy short trail which leads from the campground to the Aspry River, a peaceful rocky beach area. Signs clearly show a longer way back if you want more of a hike. We stayed in a site with electric only, with the water supply very close to the trailer if we needed it. The sites are very large for a private campground and we were well surrounded by trees which made the site quite private. There was sun with our morning coffee but the sun left by the afternoon and one night the site was cool enough that we ate supper indoors.

There are campsites that are more open and some have full hook-up, as long as you book early enough. Lots of tents and the campsite is well maintained with clean, large and single showers which cost a Canadian “loonie” for 5 minutes. Shower fast or keep that extra loonie in your pocket! The campground also sells oysters, but at $2.25 per cooked oyster, we declined. Also, bring your own firewood- $5.00 for a small rack you fill. Seems expansive to us, but seems to be typical for most campsites. Headed for Meat Cove the first day and made several stops along the way:Cabot Provincial Park, a beautiful sandy beach with fresh water pond. Supposedly the site where John Cabot landed in Cape Breton in 1497 and there is an interesting monument and short write-up. Well worth the stop. Not a lot of people on the beach as there was a cool breeze off the ocean.

Beautiful scenery, green rolling hills and spectacular ocean vistas. Made our way to Bay St. Lawrence, a fishing village with a government wharf with rugged hills and pounding surfing. Jigging Moose Campground is there but we didn’t have a look. Lots of fishing boats with the best name being ET Home, and a very attractive farm across the cove on a hill with its own wharf.

Double backed a short hop and continued to the most northern tip of Cape Breton – Meat Cove.What a fantastic trip; breathtaking ocean scenery and winding roads. The last 8K to the cove is narrow dirt road which switchbacks up and then down into Meat Cove. Safe but we were glad we weren’t pulling the trailer. However on the way we did see a motor home and there is a campground at the tip of the cove. Also a small sandy pebble beach and a restaurant as you head into the cove. If you have the opportunity certainly visit Meat Cove, a very unique part of Cape Breton, located just off the trail. As we headed back up the switchback leaving the cove, we wondered how people spend the winter in such an isolated spot.

Before heading back to the campsite, we turned down the road to Dingwall, where we visited a small museum and lighthouse that had been moved from St. Paul’s Island. Canada’s first and only federally designated “heritage” lighthouse, a woman who said it was only her second day, told us about the history of the light keepers on the island, a piece of rock, 22 miles off the coast and usually shrouded in fog. We also toured the lighthouse and saw the rotating clockwork and rare Fresnel lens. Dingwall doesn’t appear to be well publicized; however, we found our way to a beautiful beach with great views of the coast looking back at Cabot Provincial Park.

Spent our evening with 2 campers next to us in good conversation enjoying the fire pit and then moved into the open field where we watched some shooting stars in a very clear dark sky.. Hideaway Campground provides a brick fireplace with benches for any camper to use-a nice addition.

Click on to the images to view photos of Trip to Bay St. Lawrence