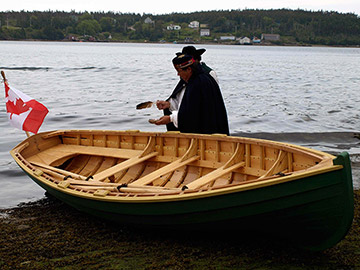 We went to the visitor center to see what was going on at Fortress Louisbourg for Canada Day and the person at the tourist bureau said that there was a Heritage Boat Launch in the morning at the Louisbourg Pier. With no idea, what to expect we showed up and there at the end of a slimy boat launch was a small boat proudly flying a Canadian Flag from the stern.

Talked to a woman who knew exactly what was going on as it was her nephew who had built the boat, Darcy Harte. We walked the dogs along the Guy Hiltz Pier where the flag pole flying the flags of 100 years of confederation flew in the wind. When we saw people gathering at the building we joined them. Darcy cut the ribbon on his new boat building space with a second boat already inside waiting to be restored.

But today was about his first boat and the ceremony was simple and elegant. First, we gathered in the courtyard of the building with people in costume, including Darcy himself. After a few speeches, a procession led by a drummer who escorted everyone to the boat. Lindsay Marshall blessed first Darcy and then the boat performing the Mi’kmaq Smudging Ceremony.

Darcy made a moving speech and then time for the traditional British custom of toasting himself, his partners and the boat with rum. Finally, the moment to launch as several people got into the boat, positioned the oars to row and the boat glided quietly into the waters of Louisbourg Harbour. 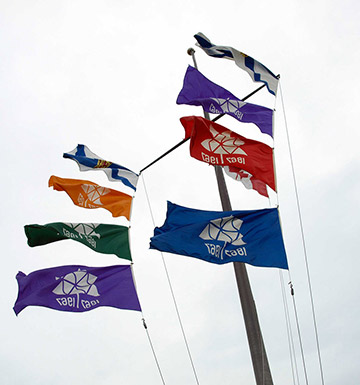 Although the boat itself is very humble, the story of the partnerships behind the boat is more complex. To begin this story, we go back to the night before and conversations when we stopped at the Legion. I can only speak for experiences in Nova Scotia but I suspect anyone who lives in rural Atlantic provinces could tell the same story? The rise of the “super cities” such as Halifax Regional Municipality and Cape Breton Regional Municipality has had for smaller rural communities the political and economic impact of leaving them behind as resources and power goes to the heavily populated “super cities”. Rural communities lose control to make changes to their own development and their future is in the hands of those political entities who are not part of the community and located many miles away.

Louisbourg when Gary and I first visited for our first Canada Day in 2012 seemed to be much more of a thriving town. Streets were filled with people and we had the choice of 3 RV parks to choose from, all located within the town of Louisbourg. This Canada Day, 5 years later, we had only 1 RV campsite to pick from. The streets were quiet, the boat launch slimy, the pier falling into disrepair and the first RV campsite we stayed at now only a parking lot. Locals we talked to in town were concerned about what is happening. Several groups including a federal government initiative partnered with the Fortress Louisburg Association have been mandated with building sustainable tourism and improving the tourism experience in the town of Louisburg. Locals are cynical and skeptical about any progress.

Back to the humble heritage boat and the partners. Darcy Harte works as a boat builder for Parks Canada and is on loan to the George D. Lewis Gateways to Opportunity Society partnered with Louisbourg Seafoods, Fortress of Louisbourg, Mahon’s Mechanical who is launching the Heritage Boat Building Project including remodeling the vacant building on the Louisbourg waterfront, that houses the boat building shop. It will also be home to Eastern NS Marine Stewardship Society which is building an interactive interpretive centre in the same building.

The launch of the humble dory was beautiful and let’s hope it leads to a brighter future for Louisbough. It is a small community with a lot to offer and well worth a few days to stay and discover. Kudos to those community businesses who are investing in their community.