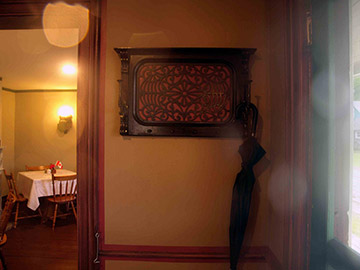 I thought this picture was perfect to start the story about our visit to Sherbrooke Village. The day poured rain, and this leads to a story about a small kindness I’ll tell you about at the end.

As with many of the museums scattered around rural Nova Scotia, this village portrays the life of a village approximately as it would have been around 1867- Canada’s Confederation. Life is fairly settled with a lumber camp, sawmill and gold mining in the area to make some men rich while others worked the mine. They came together at the Sherbrooke Hotel, however, those with wealth enjoyed the rooms upstairs, the miners and lumberjacks slept in a room in the basement.

Greenwood Cottage, the home of James and Sarah Cumminger; he owned part of the goldmine, the lumber mill and ran Cumminger General Store with his brother; the style of their home reflects their social position and means. The day we visited, Mrs. Cumminger was serving tea to modern day guests who came along while she explained her husband was away at sea, likely acquiring goods for the General Store. 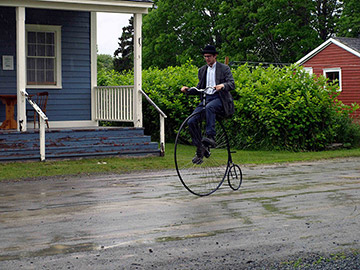 I found the Jailers House very interesting; the jail cells were right in the family home with cells on both floors of the house. The jailer’s wife assured us she was safe and usually it was intoxication that brought the men to the jails and they were held overnight to attend the courthouse just down the street. Hence the Temperance House also in the village. Mrs. Cumminger had a guest from the village who was asking everyone to sign the Temperance Petition.

If you find your self visiting on a rainy day, the visitor center provides large umbrellas you can carry with you. Trying to juggle dogs and cameras we opted not to and got very wet which brings me to the small act of kindness. A healthy home cooked meal is sold at the Sherbrooke Hotel which is now a restaurant (we both had fisherman’s pie, like a cottage pie with fish instead) Seeing how wet we were the woman dried our coats in their dryer, very much appreciated. They also serve a Victoria Tea with the fancy cups.

The buildings of the Village, they are proud to tell you in the visitor center are the original buildings, they were not moved from other areas. There is a lot to see including the pharmacy, the Ambrotype Photography Studio - you can get your photo taken in the original style, the only photographer in Nova Scotia to still use that old style. The weaver’s cottage, the telephone exchange, and the Pottery so plan to spend the day. Don’t forget to ask Joe McLane the blacksmith to ride one of the penny-farthing bikes and ask him how much one cost back then-quite shocking.

Click on to the images to view photos of Sherbrooke-Village