Along the Bay of Fundy in Annapolis County, Nova Scotia

Listen to Karen tell the story 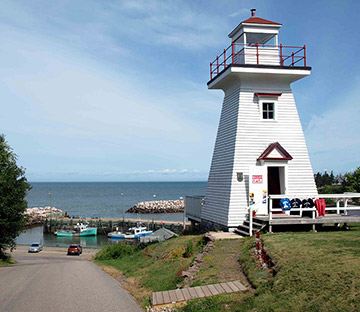 This route is done easily in a day with stops along the way, including a lighthouse, fishing boats and at the end a hike to a waterfall. The route is mainly on secondary road along the Bay of Fundy Shore with a good dirt road to return to Hwy #1, Port Royal.

Start the trip in Paradise (no kidding, there really is a Paradise) along Hwy #1 and find your way along secondary roads to Port Lorne, a small fishing village. As you wind your way along the hilly road to dip down toward the village there is an amazing view, in clear weather you can see New Brunswick! Find your way to the small harbour.

Continue along the Brinton Rd. to St. Croix Cove Rd. to your next stop, Hampton and Hampton Lighthouse. The lighthouse is open so you can climb the steep stairs to the top where an electronic light is still active guiding the fishing boats in and out of the harbour. When we were there the tide was out, so we had that unique view found along the Bay of Fundy fishing villages, boats well below the wharf. 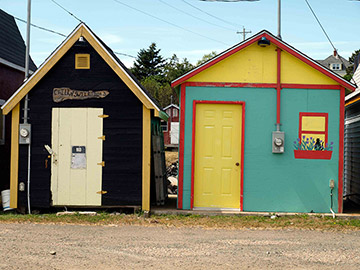 Come out of Hampton on the Shore Rd.; this is the road you stay on for the rest of the trip and like its name, you do follow the shoreline with views of the Bay of Fundy most of the way. There are 2 campgrounds along the way if you want to look for a place to camp. Cove Oceanfront Campground is a premier campground for RV’s close to Parker’s Cove. Parker’s Cove also hosts a take-out restaurant, Nautical Seafoods Cafe & Market. We didn’t stop there. However, we did poke around Bayshore Harbour with it’s fishing boats and fishing shacks. One of the shacks was very cute, I’m sure you’ll find it when you look and hope you like cats!

On to Delaps Cove where Fundy Trail Campground and Cottages is located. We just passed through. Do continue along the Shore Rd, now dirt, to head down into Delaps Cove Harbour, for another view of the Bay of Fundy and fishing boats. 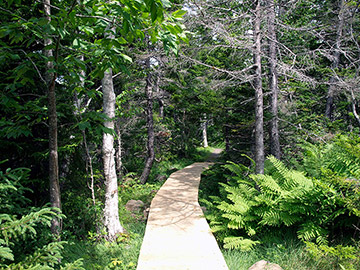 We continued along the road and found a small dirt road leading to the Fundy Trail Campground tenting area. We drove through and it is a wildness campsite with only an outhouse, but the sites have firepits and were located by a small flowing creek. However, you do need 4 wheel drive to get up the one steep hill to get out of the area, so if you don’t have that go back the way you came and look for the sign to head down into Delaps Cove Wildness Trail. The road down is well marked and easily accessible. There are 2 trails and we followed Bohaker Trail through forests, coastline to a waterfall. The hike is well marked with information markers and an easy hike of 2.2 km loop. There is also a second hike if you feel adventures. We were glad we did the hike. The stream leading to the waterfall were shallow and the best time to visit would be the spring where it is easy to see the evidence of water shaping the landscape and the impact of spring run-off.

To get back to Hwy #1, back track a short way from the Wildness Area to the Hollow Mountain Rd., a well maintained and signed dirt road to Port Royal. Click here to read the blog on Port Royal Habitation.