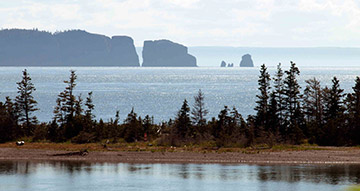 The Fundy Shore Ecotour, a scenic drive which encircles the Bay of Fundy, starting in Brooklyn Hants County to Amherst and follows the shores of Chegnecto Bay, Minas Basin and Cobequid Bay. We only covered a small portion but there was so much to see it took us the day! Any of the places we visited could have been a day themselves if we had more time to explore.

Our first stop was Fox Point Lookout. There is a short hike, but we didn’t take it but did find a spot for a great shot of the Digby Split across the water.

The Age of Sail Heritage Center Museum located along Highway 209, Port Greville, is a must see, operated by the Greville Bay Shipbuilding Museum Society. The society is a charitable organization dedicated to the preservation and conservation of the lumbering and shipbuilding history of the Parrsboro Shore.

The Museum building itself and the history of the non-profit organization is an interesting story. There is a lot to see, helpful and friendly volunteers and we didn’t give ourselves enough time to really do the museum justice. The site includes cafe/gift shop, a boat shed, a blacksmith shop and a band saw shed. Several walking trails lead from the museum to historic and natural features along the river and home to the Lighthouse. Inside the centre are artifacts, exhibits and photos of the era.

Further off the beaten path is Spencer’s Island, located at the western end of Greville Bay on the Bay of Fundy. With a history of important shipbuilding, the island now includes Old Shipyard Beach Campground, café, beautiful beach and a historic lighthouse dating to 1904 recently been granted permission by the Canadian Coast Guard to turn the light back on.

The Spencer’s Island Lighthouse had a central role in the sea-faring history of Cumberland County, and is an important community landmark. The rugged terrain in this part of Nova Scotia made land travel difficult. Communities in this are relied heavily on shipbuilding and shipping for its economic growth. The Spencer’s Island Lighthouse is a “secondary lighthouse:” its light beam was used in conjunction with the beam of another lighthouse to signal the proper route to incoming ships.

We ended our tour with Cape d’Or Scenic Area, a rugged coastline with sea and wind where Bay of Fundy runs into the Minas Channel. Another spot along the Fundy Shore Ecotour where you could easily spend the day with views of the sea and hiking.

Where you find treacherous seas and riptides, you find a lighthouse. Cape d’Or lighthouse built in 1922, was destaffed in 1989. The Advocate District Development Association preserved the site and its structures in 1995. This organization repaired and converted the lightkeeper’s houses into Lightkeeper's Kitchen Restaurant where you can  watch the Bay of Fundy tides. Even spend the night at The Guesthouse, a converted lighthouse keeper's residence.