with stop over at Savary Park, Plympton NS

with a stop over at Savary Park, Plympton Nova Scotia 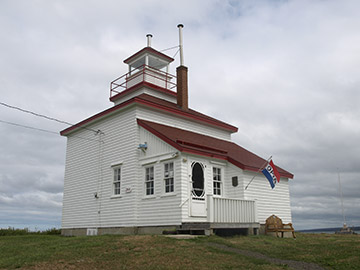 Gilberts Cove Lighthouse, dubbed the “Greatest Little Lighthouse in Canada”, located a short hop from Digby is well worth the trip. Located on a beautiful spit of land surrounded on 3 sides by St. Mary’s Bay; the beach is accessible with a picnic area and their website boasts of the lighthouse family picnic on the 3rd Sunday in July.

When Louise died in 1972, the lighthouse was boarded up for the next 10 years and become a “victim” of vandalism and decay. Fearful of losing such a piece of lighthouse history in 1982 residents of the area formed the non-profit “Gilbert Cove & District Historical Society” and nurtured the lighthouse and keeper’s home back to what they are today. 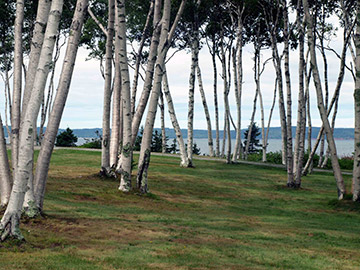 The lighthouse today is a museum with many historical photographs as well as a gift shop selling crafts and tearoom serving lunch with profits going back to maintain the lighthouse. We enjoyed a great lunch and friendly volunteer with lots of information about the history of the lighthouse. You can also climb steep stairs to the top of the lighthouse where the lantern is gone, however the spectacular views of St. Mary’s Bay remain. As you climb the stairs think about the first lighthouse keeper at the age of 75 climbing the steps to light the lantern.

On the way to Gilberts Cove, in Plympton is a very attractive provincial day park overlooking St. Mary’s Bay. Savary Park was originally a shipbuilding site and we noticed it because of its astounding and attractive birch canopy in part of the park. Walk along the trails under the canopy to come out on an access to a beach area with views of fishing boats passing by. A great place to picnic.