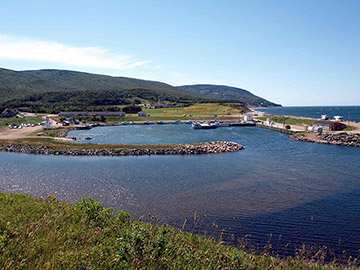 A side-trip away from the Cabot Trail with Red River as a northern most tip on the western side of the island. Red River, small isolated community, romantic as the name sounds, with sweeping green treed hills, ocean, narrow dirt roads to explore and more ocean.

After leaving Hideaway Campground and heading toward Cheticamp, we left the Cabot Trail and headed north to Pleasant Bay, Aptly named; a fishing village nestled between the greens hills and the ocean with the boats in the harbour, protected from the ocean by the breakwater of huge boulders.

For us the highlight of this trip was the community of Red River and the trip along the narrow dirt road to the Gampo Abbey, a monastery of Shambhala International. Red River seems to be a community of people looking for a quiet place to live against the backdrop of the rugged bluffs of the Atlantic Ocean. On the day we visited it was blue skies and calm seas, but the isolation of the winter must be harsh. Hidden among the spectacular vistas of the ocean were quickly running copper creeks and a curious horse.

The trip up the dirt road was an unexpected adventure as we followed what looked like an interesting narrow road. The road followed the ocean and climbed higher as we snaked up the road admiring the views. The cliffs got jagged as we climbed and we stopped at an abandoned house where a path led to the end of the cliff. A misstep would mean a serious fall off the cliffs. We cautiously peered over the edge, however the evidence of a much used fire pit made us think some were not as careful in the dark. We also came across what we called Anne’s House. It looked like no one had been there for a while with overgrown grass, weathered boards, a fallen in porch and fantastic view of a sparking ocean But tacked to the door was a pencil on a string and paper to leave Anne notes.

A very beautiful trip with lots of interesting memories.