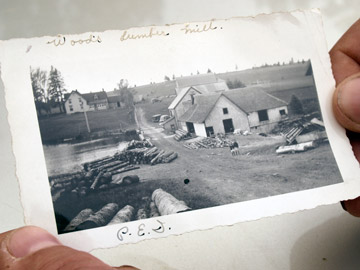 We found the Old Mill and the covered bridge, so of course we had to investigate. Both the mill and bridge are private property now; however, we got incredibly lucky. There were two men standing talking and one of them owned the mill and covered bridge. We found out we were talking with Dwight Parkman who, along with his wife, in 2009 received recognition of their restoration of the mill when it was declared a federal heritage site. Dwight started up the water wheel for us and Gary took some video, gave us the history of the mill and showed us three old black and white photos. He also let us go across the bridge and take some photos of the outside of the mill. The photo here shows the Woods sawmill, with the Patterson grist mill behind and the Patterson homestead. 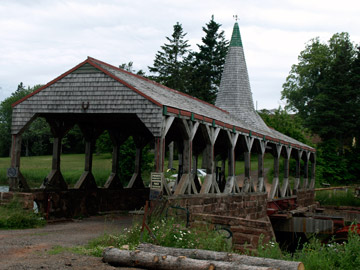 The property was sold out of the family to Lefuta Wood, who owned it until 1938, sold the electrical generating system to the Maritime Electric Company. In 1944, Reagh Bagnall, purchased the mill from Wood and operated a door and window manufacturing business. He added an addition to the 1880 structure in 1948.

Dwight and Deborah Parkman “purchased the property in 2003 and have undertaken a substantial rehabilitation of the site. The original building was raised 3 feet and moved back 6 feet. A new stone and concrete foundation was added. The new wood cedar shingles were made on the site and the replacement windows and doors were also made locally. A new water wheel was later installed.”

If you get a chance to run into Dwight and you get across the bridge, look for the old yellow house, also a historical property which was the homestead for the three generations of Patterson’s.

Victoria By The Sea, PEI Romance of Covered Bridges - NB